One down, eleven more to go!

Hi Everyone! Welcome to February! Can you believe that 1/12th of the year has been conquered already? I sure can’t! Haha. This whole last month has been a bit of blur here on my end of things and it’s stunning to believe that we’re already in February here, but we’ve have no choice but to roll with it, and roll with it is what we’re going to do! So with that, let’s get our first update card of the year up to take stock of where we are at this moment. 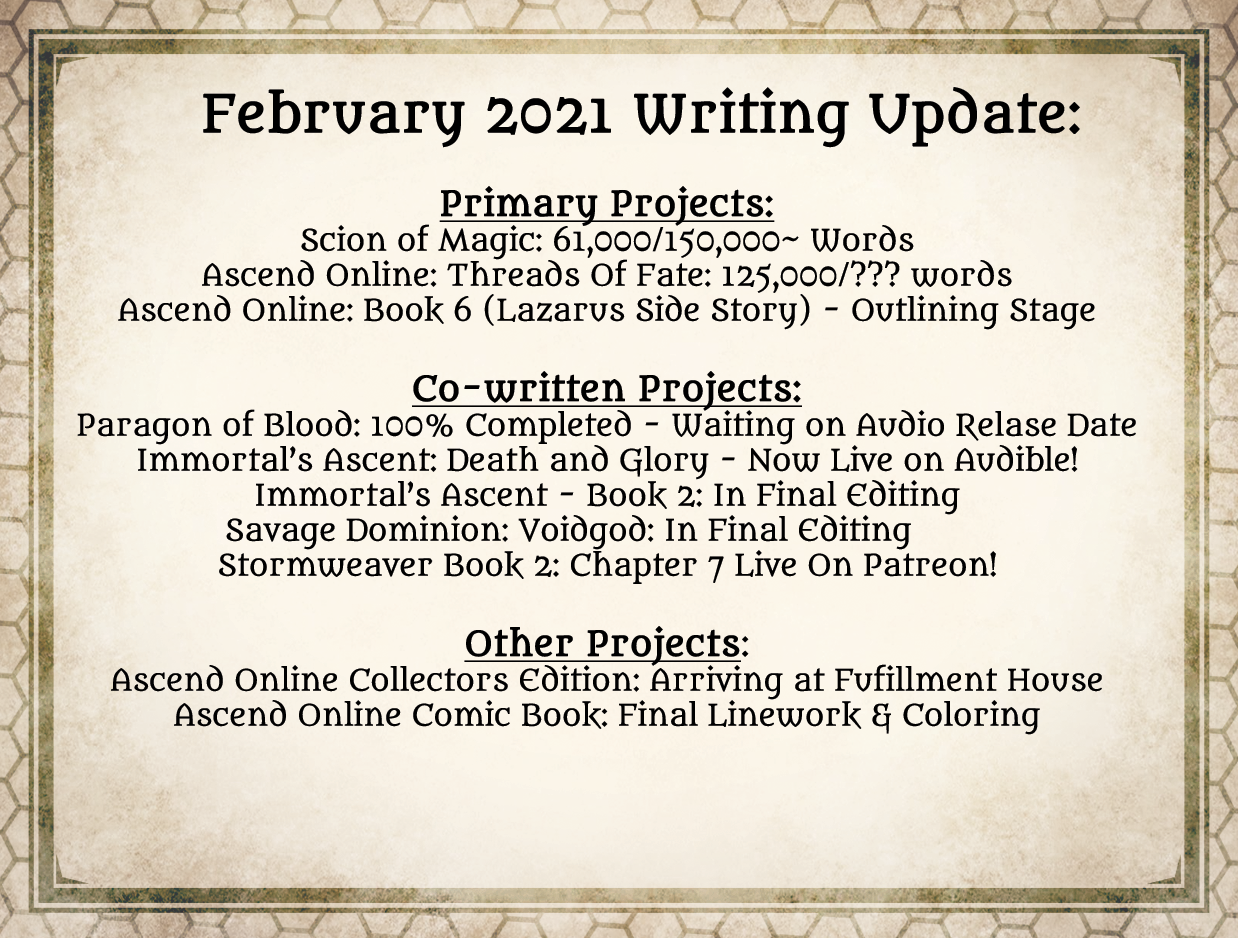 Dang that looks full, doesn’t it? Let’s break it down a bit into chunks!

With these projects, this month was largely a ‘where the heck am I?’ when it came to both Scion of Magic and Ascend Online due to the last several months of non-stop editing. I’ve been doing a bunch of re-reading to figure out where exactly I last left off with these stories the last time I had a chance to work on them as well as went through an editing pass on the top two. All in all, I found that both stories are in great shape and a little further along that I had mentally expected (which is always a great feeling). For the next coming months I expect to roughly split my time evenly between Scion of Magic and the two Ascend Online books listed here as they are both in very different stages and take a different sort of energy from me.

In the case of Scion of Magic – this is a pretty straightforward book writing process with just creating new content as I push forward to the end of the book. I’m finding myself really, really loving this story as I go through it and I hope that you all do as well when it’s finished! As for Ascend Online: Threads of Fate, it is currently more of an editing/rewriting project as I draft a new introduction for the first third of the book and not only push those changes forward through the rest of the book, but also figure out exactly what Lazarus will be doing in book 6, which has been occurring over the same timeline as books 4 and 5 will have. So far I have a pretty clear vision of what is happening and where I want to go with everything, so I am hoping that this process will be quick as a whole.

The best way I can explain this section is that we are in wrap up and waiting mode for almost all of the projects that I have on deck! Paragon has just finished it’s audio recording this last month and is in Audible’s hands as a release date is arranged. We also have my newest series, Immortal’s Ascent: Death and Glory with Chris Harris (which is a re-write and republish of his old series Domains of the Chosen) now live on Amazon! We also have book 2 in the final stages of editing, which will be submitted for Audiobook recording early next week. Beyond that crop of books we also have the final book in the Savage Dominion series, Voidgod, in the formal edit stage and hope to get it back sometime this month. Once we do it’ll be off to the races for the final polishing and preparation for release there.

As for the other big project on this list – Stormweaver – I am happy to say Bryce current has the first 7 Chapter up on the Wraithmarked Patreon for any who choose to subscribe there! If you’re interested in reading the most bleeding edge of content as it’s written, this is the place to be!

I am happy to say that these projects here are flying along awesomely! The ship carrying the Collectors Edition books is due to dock this week and begin the unloading process for the books! With luck this means that the books will be at the fulfillment house for the end of the month and we will be able to start getting them in your hands come March! I can’t wait to see what you all think about them!

As for the comic book project, we are almost there as well! Kayla has been working hard on finishing the last pages for the comic and is in the home stretch! So far we are on track timeline wise to deliver these in March in as well, and are exited to have the comics out in the world!

Beyond all the book stuff here, I had a chance to take a bit of a break this month and play Control. Let me tell you. It. Was. A. Blast. If any of you are looking for something to play at all and aren’t aware this game existed or haven’t tried it yet, then definitely see if you can’t find it on your platform of choice. I loved the feel and story behind it and it personally struck a cord with me in the end. YMMV, but it’s not often I find a game I enjoyed this much, and so I want to share the few occasions that I do!

Aaaand that’s all I got on this rather long winded update here!

I am planning a somewhat low key month for February here as I start to work through a few more games I have on deck while poking away on SoM and AsO at the same time. We’ll be back again in March with another monthly update and hopefully news on the next batch of upcoming releases! Until then, I hope you all stay healthy and happy!

One thought on “One down, eleven more to go!”