November, November, this one will be one to remember

Hi everyone! Here we are again sprinting into another November, which means I can formally say ‘Merry Christmas’ to you all!

*Dodges all the thrown tomatoes*

Alright, alright, so maybe it’s a little early for the holiday cheer (looking at you grocery stores, who I saw having 2022 themed party supplies up for sale), but we’re racing towards the end of year with blinding speed and there’s still a heck of a lot more still to do before it can end! So as every month here goes, let’s take a look at how the last month went, and what the plan is ahead for next few weeks to come. 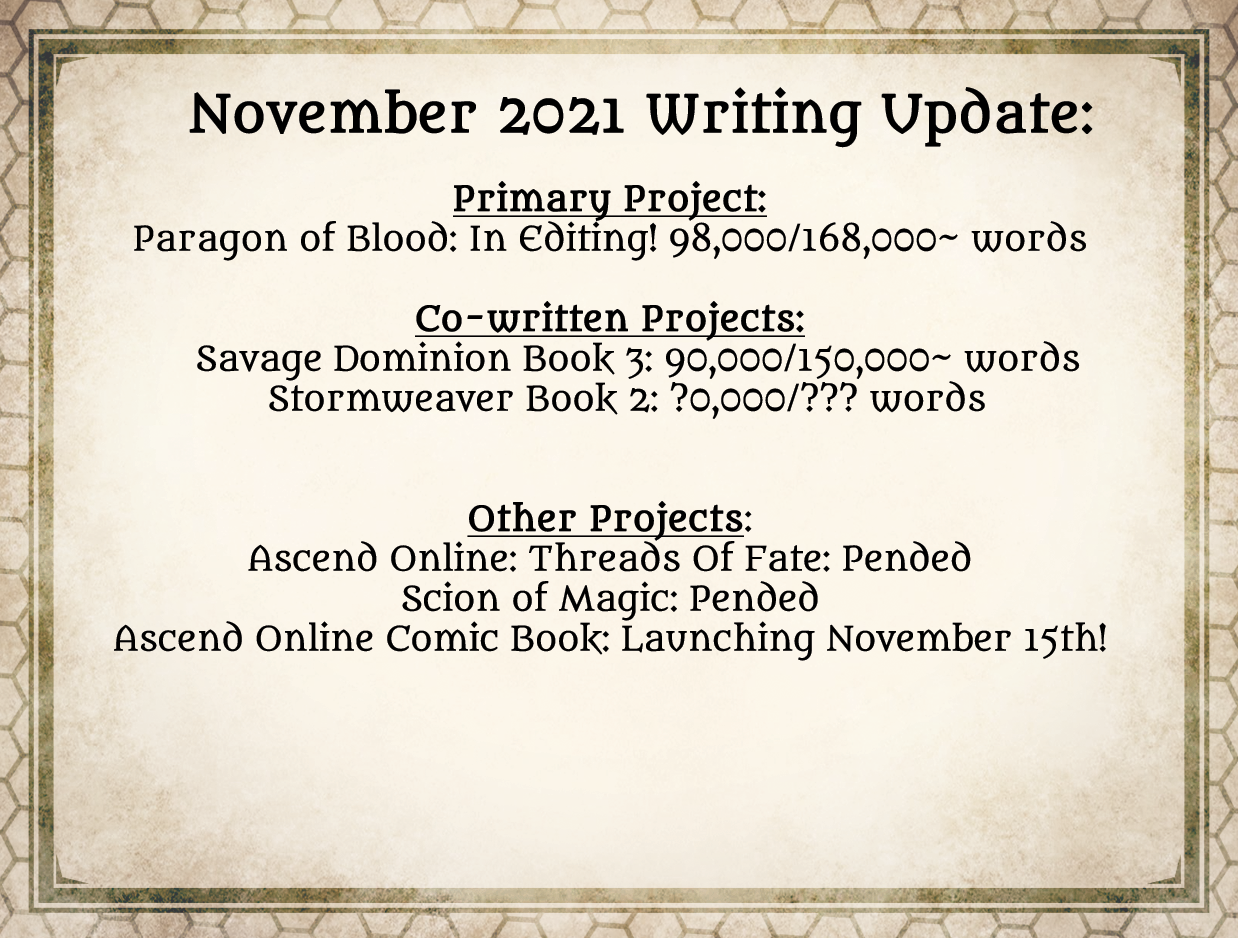 So as mentioned from last month, my major focus for the month of October has been Paragon of Blood as we get it ready for formal editing and then audiobook production afterwards. I originally thought that these edits and revisions would have gone a bit faster when we started them, but as we dig back into the story we were cursed with an Idea. One that was strong enough that we felt we had to run with and integrate into the story. That however prompted a more substantial wave of rewriting than was originally planned, which has us scrambling slightly to catch up to where we wanted to be at month’s end.

At the time of writing this now we’re a little more than halfway through the content and things are starting to pick up speed, so I am really hoping that we’ll be able to burn through the remaining chapters faster and faster as we get close to the end. In any case as it stands now, we’re expecting this to be our major focus for the month and will be chasing our deadline quite a bit. Fingers crossed there are no surprises and that we can finish it with time to spare!

Coming in next is Savage Dominion book 3 which is in the home stretch of being completed! Gray has been plugging along in polishing off the final arc of the book and with luck we hope to have it finished this month sometime and then get into the editing and postproduction process. At the moment we don’t have a tentative release date for the book other than ‘likely not earlier than February 2022’, but as soon as we have a more concrete timing in place, we will absolutely let you all know!

We finally broke ground on Stormweaver 2 this month and it has chugged along fairly well as a whole so far! Unfortunately, though we hit a bit of a snag in the second half of the month when Bryce got sick with a nasty cold that’s put him out completely the last two-ish weeks. As things stand right now, we’ve got a chunk of words done for the introduction but it’s very much in a raw state – so in the interest of people not seeing some backsliding if we decide to delete some words this next month we’re keeping the word count blank this month. Hopefully we’ll be able to come out swinging at the end of November with a huge update and hopefully a timeline on when we’ll be seeing the advance chapters hitting the Wraithmarked Patreon.

In the meantime – Bryce did manage to come back to life this last weekend just enough to host a very much anticipated AMA over on the /r/warformed subreddit. If you’re interested in checking out the questions he answered,head on over and take a look!

I know I mentioned last month that we were hoping to have this comic book kickstarter go live today on November 1st, but unfortunately due to the extreme busy-ness on my end of things and a few logistical wrinkles (like this worldwide paper shortage!!) we’ve decided to delay the launch for two weeks to help us catch up a little bit. So please keep a look out for this project to go live mid-month, which we will let you all know via another blog post, newsletter release, facebook post, reddit post, shout from nearby mountain tops, dream advertisements, subliminal messaging…

I think you all get the picture.

In any case however you will all definitely not want to miss the project’s launch as there will be special Early Bird Pledges available for early backers in the first 24 hours! So, if you’ve not yet followed the project on Kickstarter,now is the time to do so!

Okay, and that’s it for the month here!

I’ve certainly got my work cut out for me for the next little while ahead, but I tend to thrive while busy and I’m excited to tackle it all this month! I am also happy to say that things have been holding pretty steadily with my hand, which while tired at times, has managed to stay 98% pain free throughout the last two months as I get back into daily work. I’m hoping that with some more time and exercise I’ll be able to get the last little bits of discomfort banished for good and be ready for anything that comes my way again.

So, with that, we’ll put a wrap on this month’s update and see you all again when it comes to the comic book kickstarter! Till then I hope all stay healthy and happy!

2 thoughts on “November, November, this one will be one to remember”

> Happy May!
> JÄGER(MASTER) HAS ARRIVED!
> Ready Player Four
> One down, eleven more to go!