Hi Everyone! Can you believe it’s March already?! Time is just flying by in a blur this year! I hope that you’re all doing well over there and are ready for an early spring – I for one am very ready to finally have some warm weather coming our way again! Here’s to hoping that it comes soon! Until then though, we’ll have to keep warm with this month’s writing update, so here we go starting off with our word count updates on all the projects on deck. 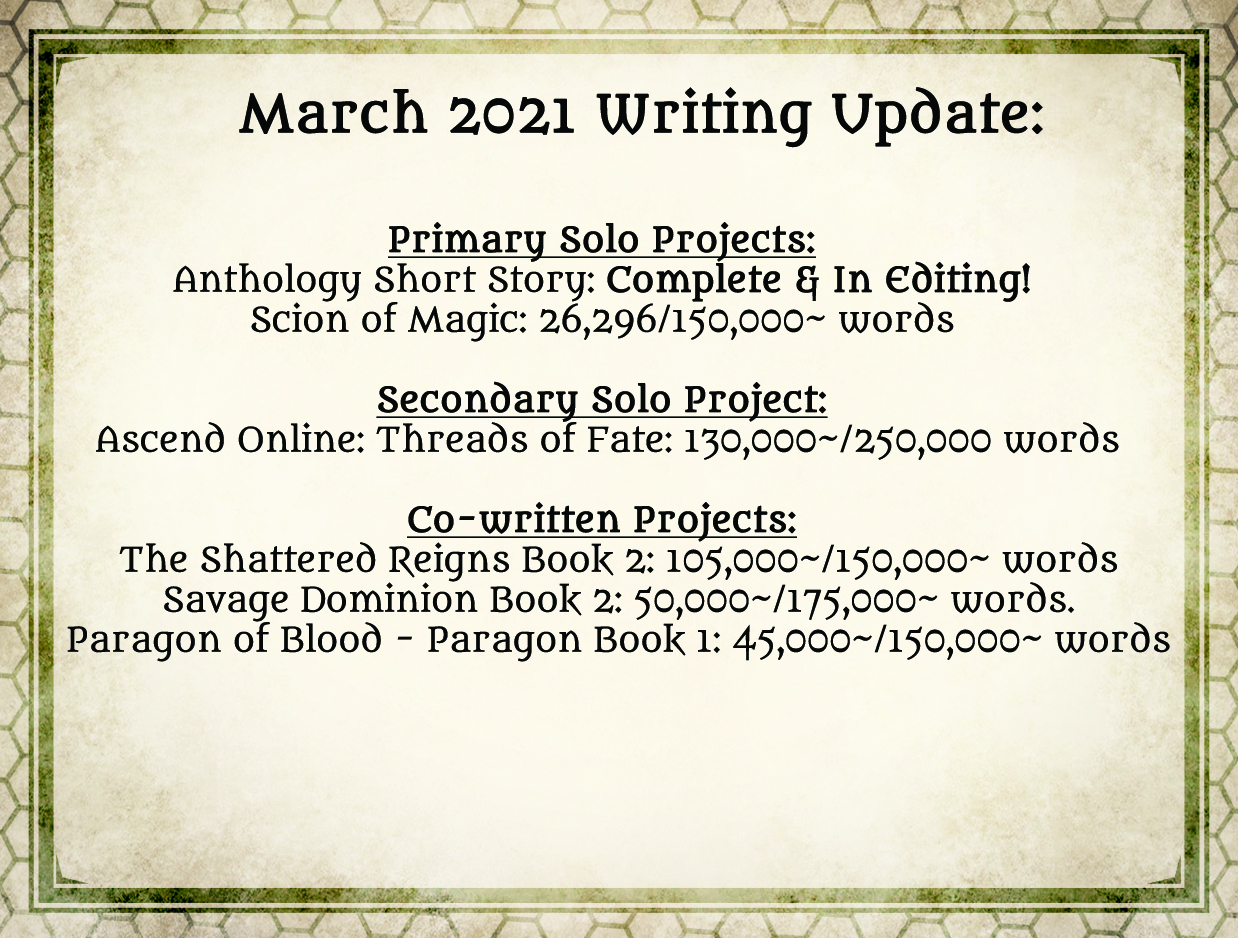 So, as we see first off here, the anthology short story is done! Woo! This took the majority of the month for me to knock out this month, but I am super happy that it’s done and sorted out! Right now it’s in the post production stage of editing, and I’ll likely circle back to it sometime later this month to polish it off. In either case, I don’t expect it to take too long and it’ll be another thing off my plate! (Yaaaay) At the moment, I don’t have any details to share on when exactly the anthology it’s attached to will be released, but as soon as I do, I will definitely share! Because of my focus on this short story this month, I haven’t really made all that much progress on Scion of Magic until these last few days, but I am hoping to get back into the swing of things and get a solid writing month under my belt this month!

Past that, sharp eyes will notice that there’s been some trimming on AsO: Threads of Fate.  I’ve been slowly combing over the words I’ve already written and cleaning up stuff that’s no longer relevant to the story and I’ve also begun outlining the new story structure for the book. It’s still a while yet until I’ll be able to devote my full attention to the book, but I’m allowing myself to start thinking more about it now. Hopefully, once Scion of Magic is done and out of my hands, I’ll be able to hit the ground running with it quickly.

On a cowriting level all of the projects are just flying along! We’ve made great strides on every single project this month and should have a better sense of when each book is going to be finished come the April update. So be sure to stay tuned for that!

In exciting news regarding Savage Dominion, I am very happy to announce that the audiobook will be narrated by none other than the amazing Luke Daniels with a tentative late May release planned for the book. Hopefully we will be able to get a date firmly locked in and a pre-order up sooner than later so I can share it with all of you! In the spirit of building up some excitement there, I am happy to share a tiny snippet from Book 2 that we’re working on:

An arrow shot along the forest path and passed between our faces.

I dropped Seren, and we had both jerked back into combat readiness before we heard Mercy braying. “No making out in the forest! That’s how you get woodlice.”

Exciting stuff, right? Hah, I am super looking forward to having this book done, and being able to share it with you all!

And last but not least, beyond this already somewhat exhaustive list…I’ve been able to add in two more secret projects as well that I am not quite ready to talk about just yet, but I hopefully will be soon. So stay tuned for some more even exciting information coming down the pipe next month!

Okay, and that’s all I got! I hope that you all have a safe and happy month! We’ll be back again when it’s time to hype up Stormweaver: Iron Prince’s audio launch towards the end of the month! (Which you can pre-order here if you haven’t already!)