Hi Everyone! Happy February! We survived the year that was January, woo! (Seriously, is it just me, or did this feel like an exceptionally long month?!) In either case, I hope that the winter is treating you all well so far! It’s been a pretty busy month on this end of things both on the baby front and finding time to get some writing in, but we are slowly finding our groove here and hope to have a good routine going as we head deeper into February. So now, with all of that being done and said, let’s start off with figuring out exactly where we are on our current projects and what my (tentative) plan is going forward for the year here.

Ascend Online: Glory to the Brave

Starting with the big one first – I managed to get myself back into the writing again early this month and conquered a huge battle chapter and made great headway into the following chapter afterwards which is nearly finished. Unfortunately, when I started writing this month, I didn’t take a ‘starting’ wordcount, but we’re starting February at a nice round 114,000 words and I am expecting it to balloon quite substantially as the month progresses. As part of my restructuring with the book split, I currently have about 20,000 to 30,000 words to be inserted over the next few chapters that are already written and need a bit of editing for continuity. Hopefully I’ll be able to get those all squared out this month, plus write a nice and solid chunk of words to keep things moving!

With all of that being said though – I still have a fair bit to go with the book before it’s done and ready to go, so as much as all of you want to know…I still have no idea when the book will be ready. Sometime in the spring at the earliest, but that could very well dip into the summer depending on how long the book ends up and the editing afterwards, which for a 200,000+ word long book will take several weeks at least. But since we’re starting to talk about a rough timeframe for Glory to the Brave’s release, I think it’s also a good time to talk about what’s going to come after it, which brings us to the next section here…

Beyond Glory to the Brave

Okay, so as you all know, I split off a huge chunk of words (about 180,000 words) from what originally was Glory to the Brave and is likely going to form the core of its own book afterwards, since the majority of it follows its own story arc separate of what the book now has. So, by that logic, that means another book is going to follow super quick on the heels of Glory to the Brave, right?

Well…not exactly and for two reasons.

The first is because of the split, I’ve had to completely readjust my Timeline of Events for the AsO universe, pushing the events in the back half of the split ahead and needing to address others much earlier. So, without any substantial spoilers, that means the next Ascend Online book after Glory to the Brave, will be a Lazarus side story, followed by the events that have been pushed ahead in the split. Given how interwoven these two books will likely be with one another, I am likely not going to publish either of them until they’re both done (or nearly so), starting with the side story first, since it happens at the same time as both Glory to the Brave and the next main series book following it. Doing it this way will help me keep the continuity of the story intact as well as make sure the timelines are accurate.

I know that some of you aren’t too interested in side stories, and I can appreciate that, but given the scope of the world that I have on the go here, I feel this extra content is the best way possibly for me to both flesh everything out and give those who are interested the grounding for the bigger picture of the story.

As for the second reason why there won’t be a quick set of books coming after Glory to the Brave is because I’m going to be taking a bit of a break from Ascend Online once the book is done. I’ve pretty much spent the last five years of my life writing and/or thinking about Ascend Online one way or another and I’m at the point where I need to let it sit for a time, or risk hurting the passion I have for the series. Of course, this won’t mean that I’m just not going to be working on it, but rather that I’m going to be giving my other in progress works writing priority for a stretch of time, which as many of you may already know, is my upcoming SciFi LitRPG series, Starfall and the next book in The Shattered Reigns series with Bryce, The Blood of Kings.

I know I have talked about this project in the past and delayed it in order to tackle Glory to the Brave, but I am excited beyond words to jump into this story and give it the love that it deserves. I’ve already managed to write a decent chunk of the story and have absolutely a TON of ideas I am super excited to show you all. But as with everything about me, I know that a single picture can tell a thousand words (or in my case, ten thousand, since I’m so wordy), so I am going to cut straight to a piece of concept art for what you can expect out of Starfall: 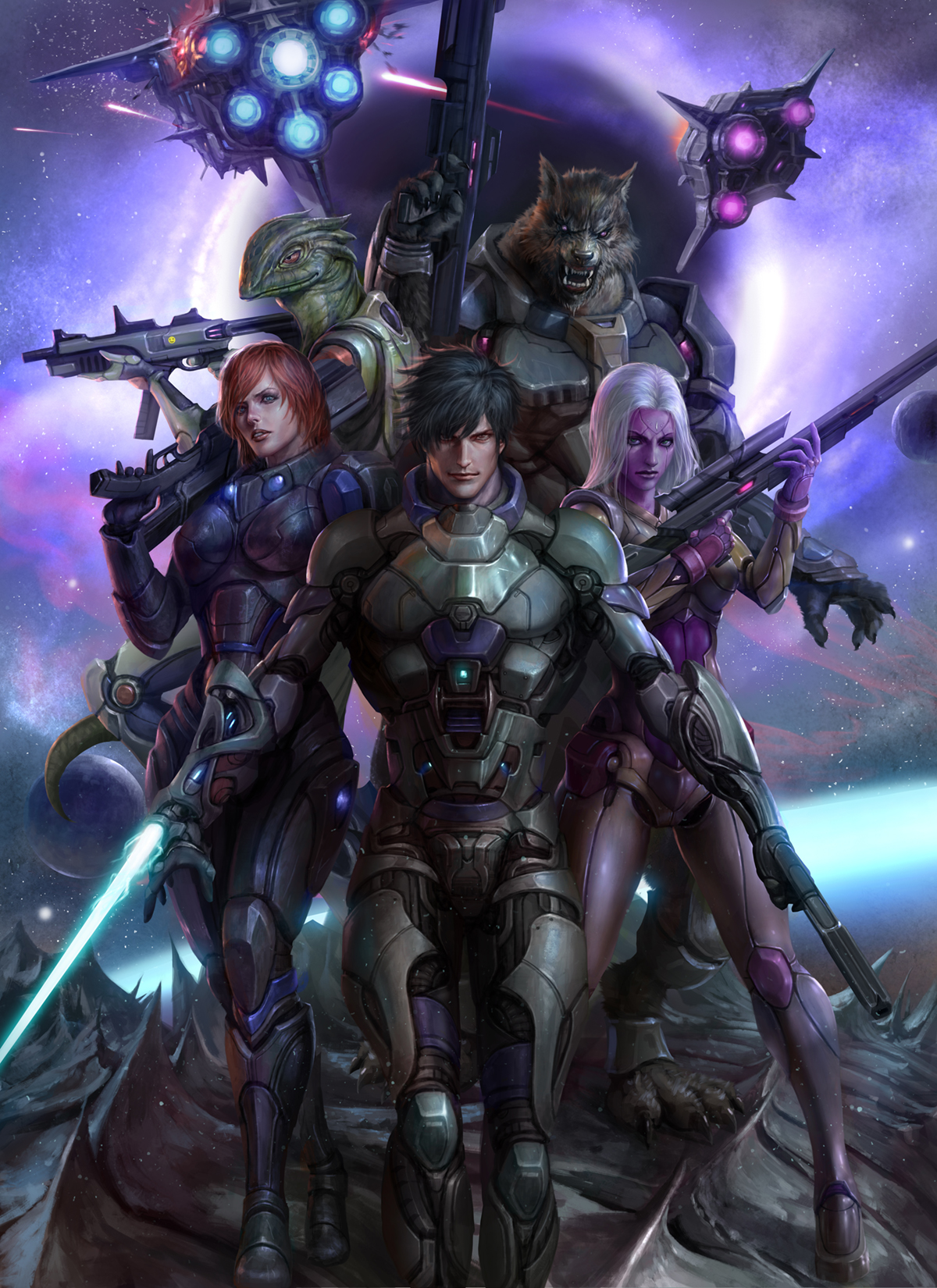 It looks epic right? Just wait until the actual covers are done! This series is going to be awesome and you will be able to follow it right on my patreon page as I write it – long before it will be published in ebook or audio. (Stay tuned for updates on that front!)

So what does that mean for a writing plan going forward for 2020 and beyond?

I know that all of this sounds pretty confusing when put into text, so to help that along and explain it visually, I’ve put this handy list together so you can all see my anticipated publishing schedule for the next little while:

As you can all see, my plan after finishing Glory to the Brave will be to write three Starfall books back to back to back, while also working on the next Shattered Reigns book with Bryce. Once those books are done, I plan to go back to Ascend Online to finish Lazarus’s next side story as well as the next main series book (so books 5 and 6 for those who are counting). In addition to the books presented on this list I do also have a pair of Secret Projects that I am also going to be working on, but I’m not quite ready to talk about them just yet. Vaguebooking I know, but with luck I may have some exciting news to announce come our March update, so stay tuned!

And that’s all I have for the month for you all! I promised to try and make more of these updates this year and this one turned out to be a bit of a long one! Here is to hoping that we’ll have an awesome progress report come our March update on the Glory to the Brave front!

See you all then!